Installing a static script on your website is sufficient for DataUnlocker to work, and you can stop reading now if you think integrating DataUnlocker to your continuous integration pipelines is an overhead or you're fine updating the script manually when needed.

By design, DataUnlocker's script must be a static synchronous script that will precede all other scripts on the webpage. DataUnlocker decided not to host this script on its own servers to prevent even a small network delay to download this script or any possible availability issues that can affect your production website, hence, you need to inject a static script to the HTML code of your website.

There are 2 benefits of using script injection in continuous integration pipeline over the static script version:

DataUnlocker provides a generic way to insert the script into any HTML page of your website. You can also utilize it for any template files used to assemble your front end during the build phase of your front end.

DataUnlocker exposes the following public API endpoints for injecting its script into the HTML code:

Where {property-id} is the same ID you see in browser's URL when looking at your property on DataUnlocker. By using this endpoint, you are guaranteed to always properly place the script in the HTML code, for instance, by using this bash command:

🔮 This DataUnlocker's endpoint is smart enough to detect its own script if it's already present in the HTML code. You can utilize this magic by putting a static script version to the HTML file, which will guard your application in case DataUnlocker's script injection endpoint accidentally fails in one of the builds.

Follow the instructions on the UI to set continuous integration up with DataUnlocker's script injection: 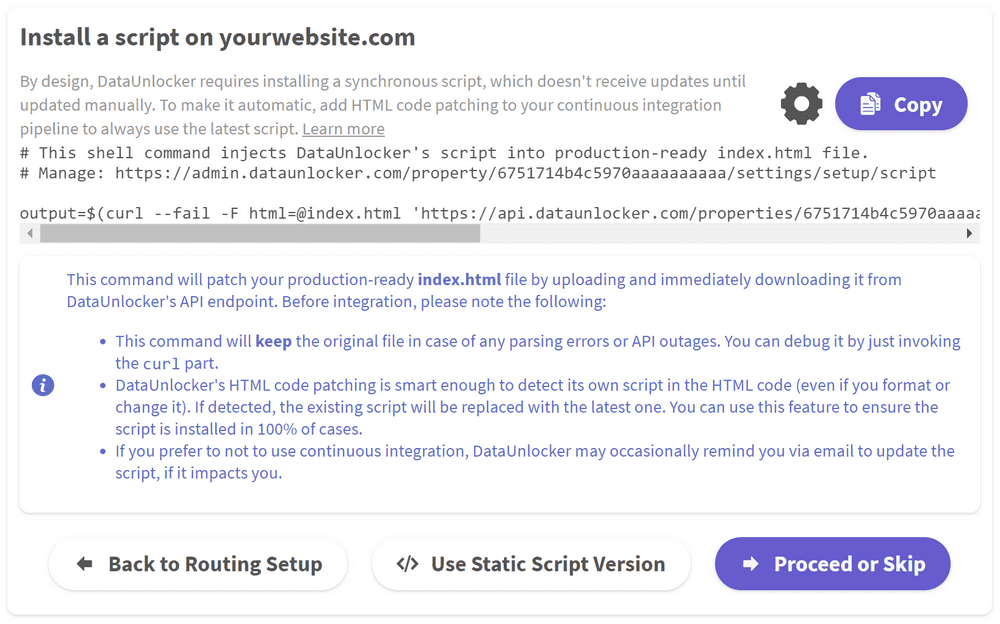