This page explains how to configure the script update webhook.

Generally, you would want this webhook to perform one of the following actions:

Here are a few things to consider when designing the solution for embedding DataUnlocker's script:

The implementation of this webhook highly depends on which system or framework you are using to build and deploy your website or web application. DataUnlocker can't provide a guide for each and every setup, especially for custom ones. However, if you're having any difficulties regarding deciding what is the best way to implement script update webhook in your infrastructure, you're welcome to chat with support@dataunlocker.com.

Below we provide an example based on the rebuild/redeploy + dynamic script injection example.

This example demonstrates how to redeploy the Gatsby application when using gatsby-plugin-dataunlocker. This plugin injects DataUnlocker's script to all website's pages using the dynamic script injection, hence all we need to do is to trigger the build and deployment process which Gatsby provides an API for.

Gatsby Cloud has a convenient webhook which will rebuild the website once invoked. You can find it under the Site Settings in the Gatsby Cloud UI.

Then paste it to DataUnlocker's automation pipeline script update webhook step, choose the method POST from the dropdown menu and click "Save": 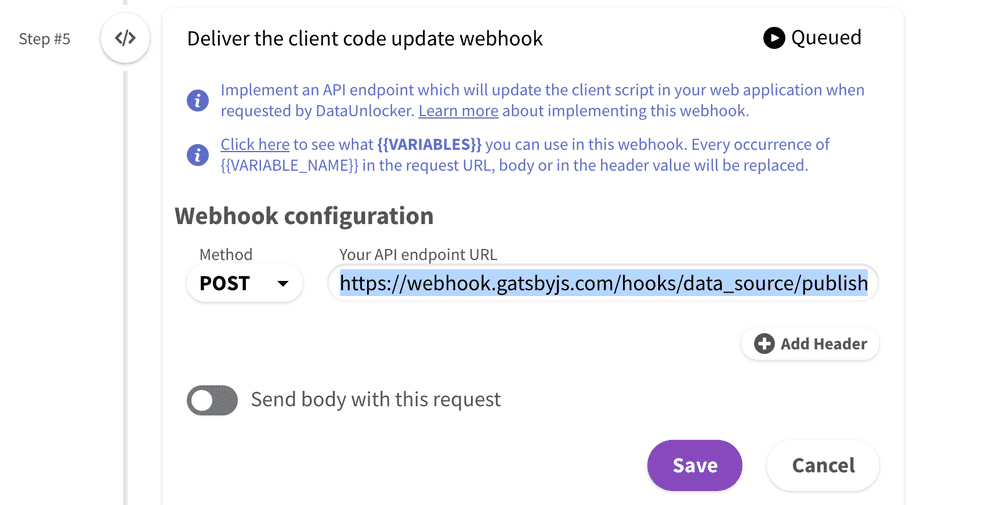 After running the pipeline, once the webhook step is completed, you will see that the new build has started:

Under the hood, gatsby-plugin-dataunlocker will process each page of the gatsby website using the dynamic script injection, and hence the script will get updated. Later, you will see both steps completed: